Botolph’s Bowmen were formed in September 1995 and had 26 members during that first year.
We are named after the saint associated with Botesdale. He was an Abbot, who died c. 680. and his name is perpetuated in many towns and cities both in the UK and USA. He built a monastery in Icanhoe which in modern days is known as Boston (Botolph’s Town). Although he is mentioned in several works from the period, there is little concrete information other than he lived in East Anglia at some point during his life. Whether he had need of Archers is unknown, but he has some to call on now should the need arise.
His feast day is celebrated on the 17th of June, and he is the patron saint of Travellers and Agriculture workers.
Botolph’s Bowmen are affiliated with the Grand National Archery Society, the Southern Counties Archery Society and the Norfolk Archery Association. 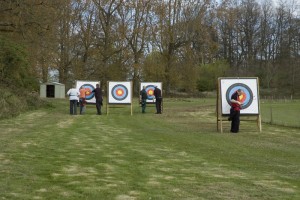